ICYMI, here's the playlist from Café Refill this week:

There was a special Valentine's theme this week at Café, and Marc & Leslie Smith were our guest speakers! 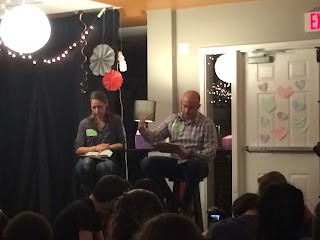 They talked about love, and the kind of love that the Bible challenges us to live out. While romantic love is usually associated with Valentine's Day and is essential to any great marriage, the love mentioned in 1 Corinthians 13 requires a lot more of us. It requires maturity, grace towards others, humility, and selflessness.

4 Love is patient, love is kind. It does not envy, it does not boast, it is not proud. 5 It does not dishonor others, it is not self-seeking, it is not easily angered, it keeps no record of wrongs. 6 Love does not delight in evil but rejoices with the truth. 7 It always protects, always trusts, always hopes, always perseveres.

13 And now these three remain: faith, hope and love. But the greatest of these is love.

Marc & Leslie shared some great stories about their kids, and how their kids teach them more about what this kind of love looks like every day. Sometimes it's easy to love people (when they're being sweet/fun/well-behaved), but other times it can be challenging (when they have stomach viruses/pee on the floor/playfully hit you harder than they probably should). The important thing, though, is that we choose to love others above all else because that's exactly what Jesus did for us.
No comments:

Café began on Tuesday with this simple challenge...

We grow up hoping for many things... hoping to do many things... hoping to become the person we want to be...
But as we get older, when we hope for something and end up disappointed instead, it can be easy to turn to cynicism as a way to cope with all forms of suffering. Anything from failing a test, to watching the Falcons lose the Superbowl, to missing out on a great opportunity, to losing a loved one... life isn't always easy, but we can choose how we deal with these forms of suffering.

Paul tells us some wise words about suffering in Romans 1:1-5.


Therefore, since we have been justified through faith, we have peace with God through our Lord Jesus Christ, 2 through whom we have gained access by faith into this grace in which we now stand. And we boast in the hope of the glory of God. 3 Not only so, but we also glory in our sufferings, because we know that suffering produces perseverance; 4 perseverance, character; and character, hope. 5 And hope does not put us to shame, because God’s love has been poured out into our hearts through the Holy Spirit, who has been given to us.

Rob Cosby made a guest appearance at Café on Tuesday, and told us about what this passage has meant to him. Last April, Rob woke up with extreme back pain and lost feeling in his legs, causing an unexpected trip to the hospital where he learned that he had suffered a spinal stroke. The doctors guessed he would eventually get better, but they didn't know how long it would take for Rob to regain any sort of function in his legs. He spent the next few months at The Shepherd Center, going through rehabilitation and persevering every day to help his legs get stronger. During one of his first nights in the hospital, Rob came across the movie The Secret Life of Walter Mitty and watched it. When the movie ended and the credits began to roll, the song "Stay Alive" by José Gonzalez played... and the lyrics stuck with Rob throughout the rest of his recovery journey. But who could explain why better than Rob himself, who created a video montage of his experience to this song:

Rob's story is an incredible, real-life example of what Paul was trying to say in Romans 1:1-5. We know that suffering can lead to hope if we persevere and grow along the way. While his condition has improved dramatically and he walks to and from class everyday, Rob is still working to get stronger and healthier. While things aren't always easy, they can be good... and Rob ended his story by reading some words that have meant a lot to him over the past year:

2 Corinthians 4:16-18
16 Therefore we do not lose heart. Though outwardly we are wasting away, yet inwardly we are being renewed day by day. 17 For our light and momentary troubles are achieving for us an eternal glory that far outweighs them all. 18 So we fix our eyes not on what is seen, but on what is unseen, since what is seen is temporary, but what is unseen is eternal.

On Tuesday night, the Café crowd had to choose between two songs to be part of the ongoing soundtrack of the semester. It was a match-up for the history books:
"Waiting On the World to Change" by John Mayer vs. "Man in the Mirror" by Michael Jackson...

While John Mayer takes a more passive approach to the troubles of the world, the King of Pop challenges us to be the change we want to see. As he says in the song, "If you want to make the world a better place, take a look at yourself then make a change."

Jeremy then connected the lyrics of "Man in the Mirror" to the way we should approach faith. It's often easier to take a passive/"Waiting On the World to Change" approach, but God ultimately wants a lot more from us than just waiting around for something good to happen. We talked about the idea of faith expressing itself in love... an easy thing to say, but a lot harder to actually do. As James tells us in the New Testament:


James 2:14-26 NIV
14 What good is it, my brothers and sisters, if someone claims to have faith but has no deeds? Can such faith save them? 15 Suppose a brother or a sister is without clothes and daily food. 16 If one of you says to them, “Go in peace; keep warm and well fed,” but does nothing about their physical needs, what good is it? 17 In the same way, faith by itself, if it is not accompanied by action, is dead.
18 But someone will say, “You have faith; I have deeds.”
Show me your faith without deeds, and I will show you my faith by my deeds. 19 You believe that there is one God. Good! Even the demons believe that—and shudder.
20 You foolish person, do you want evidence that faith without deeds is useless? 21 Was not our father Abraham considered righteous for what he did when he offered his son Isaac on the altar? 22 You see that his faith and his actions were working together, and his faith was made complete by what he did. 23 And the scripture was fulfilled that says, “Abraham believed God, and it was credited to him as righteousness,” and he was called God’s friend. 24 You see that a person is considered righteous by what they do and not by faith alone. 25 In the same way, was not even Rahab the prostitute considered righteous for what she did when she gave lodging to the spies and sent them off in a different direction? 26 As the body without the spirit is dead, so faith without deeds is dead.

While we can tell people what we believe, the Bible tells us that God wants us to live in a way that shows people who Jesus is, representing him through our words AND actions. We are called to have "Man in the Mirror" faiths, to press into sometimes uncomfortable situations for the betterment of others, and to show people that they are loved and that they matter.
No comments: