Café this week resumed with some amazing apple pie-like desserts and a talk from a few of our interns! 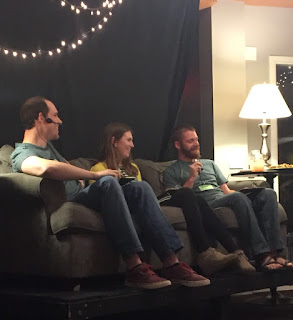 Mason, Helen, and John spoke to us all about the importance of going above and beyond to show the people we love that we care deeply about them, which was a conversation spurred from this story in John 12:


1 Six days before the Passover, Jesus came to Bethany, where Lazarus lived, whom Jesus had raised from the dead. 2 Here a dinner was given in Jesus’ honor. Martha served, while Lazarus was among those reclining at the table with him. 3 Then Mary took about a pint of pure nard, an expensive perfume; she poured it on Jesus’ feet and wiped his feet with her hair. And the house was filled with the fragrance of the perfume. 4 But one of his disciples, Judas Iscariot, who was later to betray him, objected, 5 “Why wasn’t this perfume sold and the money given to the poor? It was worth a year’s wages.” 6 He did not say this because he cared about the poor but because he was a thief; as keeper of the money bag, he used to help himself to what was put into it. 7 “Leave her alone,” Jesus replied. “It was intended that she should save this perfume for the day of my burial. 8 You will always have the poor among you, but you will not always have me.” 9 Meanwhile a large crowd of Jews found out that Jesus was there and came, not only because of him but also to see Lazarus, whom he had raised from the dead. 10 So the chief priests made plans to kill Lazarus as well, 11 for on account of him many of the Jews were going over to Jesus and believing in him.

The interns went on to talk about how Mary's act here was one of extravagance, selfless love, and intense devotion. Mary - who had just seen Jesus raise her brother from the dead - wanted to show Jesus that she loved him and believed in him. She understood the gravity of his existence and knew how important he was, but she could also recognize that the local leaders were growing more and more frustrated with the way he was challenging societal norms and the overarching religious leadership. She could probably sense that tension and knew Jesus wasn't going to be around them for too much longer, so she wanted to honor him as the person she believed him to be - the Messiah, the king of all kings, the son of God. Although it could be easy to write off Mary as careless or racy, Mary's act was reckless, brave, and well-intentioned. When Judas questions her motives (and her sanity, in a way), Jesus is quick to jump to her defense and justify why her actions were honorable and truly loving. The perfume was expensive and could have been used in a different way, but Jesus encourages Mary's sacrifice because he recognizes that she truly loves and values him and her remaining time with him.

With only 5 weeks left in the semester, our time is limited too. The evening ended with a challenge to fully embrace this idea for the rest of the semester - to show God and the people we care about most that we love them and value our relationships with them.
No comments: