The last Café of the year was Marvel themed, with the premiere of Avengers: Endgame in just a few days. We drank Hulk's greenocolada (which was so good) and ate Aunt May's banana pudding.

Tonight, we discussed endings and change, especially in the context of this year coming to a close. More specifically, we looked at Mark 16:1-8. This is the passage that comes right after Jesus' crucifixion, when people begin to realize that Jesus had resurrected.

When the Sabbath was over, Mary Magdalene, Mary the mother of James, and Salome bought spices so that they might go to anoint Jesus’ body. 2 Very early on the first day of the week, just after sunrise, they were on their way to the tomb 3 and they asked each other, “Who will roll the stone away from the entrance of the tomb?”

4 But when they looked up, they saw that the stone, which was very large, had been rolled away. 5 As they entered the tomb, they saw a young man dressed in a white robe sitting on the right side, and they were alarmed.

6 “Don’t be alarmed,” he said. “You are looking for Jesus the Nazarene, who was crucified. He has risen! He is not here. See the place where they laid him. 7 But go, tell his disciples and Peter, ‘He is going ahead of you into Galilee. There you will see him, just as he told you.’”

8 Trembling and bewildered, the women went out and fled from the tomb. They said nothing to anyone, because they were afraid. 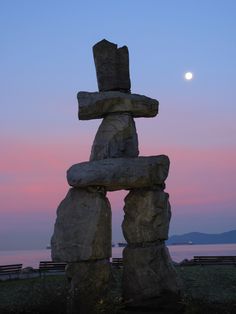 The reactions to Jesus not being in the tomb are ones of fright, bewilderment, and trembling. They're confused, but they get surprised by God because Jesus' death was not an ending; it was a beginning.

Inukshuks are structures made of flat stones. The Inuit people would build them up pretty high, walk until the structure had almost disappeared from sight, and then build another one. They were markers that served as signals for people who would travel after them. It was a sign that someone had been there; it was a symbol of hope.

The resurrection in is a symbol of hope for us. It says that God IS with us, and that ultimately, confusion isn't so unknown because Jesus was ahead of the disciples in this passage, and he's ahead of us, now. It also removes the expiration date from Jesus. It means that He's God, and that's worth paying attention to. It means that He has the final say on His life.

The semester is ending. For some of us, it's exciting. It means graduation or the start of summer or rest from busy weeks. For some of us (like me), this is difficult. It means that people will graduate and move on. It means that a lot of things will be changing. Either way, Jeremy reminded us tonight that life goes on, and that there is hope of good things in the future. Our stories don't end here, they only just begin.